Somehow it's been two years since an update on my project.  Work was real slow during that time... brief paint removal tasks once in awhile, but mostly a long hiatus.  Lots of things get in the way... family, work... but lazy too.  Not to mention that the main task at hand was stripping the paint, which by far has been the least enjoyable part of the whole process for me to this point so it was easy to not be motivated.  The paint is finally off now though as you can see below.  Glad that PITA is over!

Media blasting, chemical stripping and mechanical stripping were the methods I considered before getting started.  They all have their own pros & cons... no one way is perfect for this car in my opinion.  I decided against media blasting for a few reasons.  For one, I couldn't find anyone near me experienced with Corvette's.  But even if I had, the common method of soda blasting as a gentle approach for fiberglass would still have had me concerned since any soda residue not neutralized and left behind can alter pH thus affecting the quality of a final paint job.  I decided against chemical stripping for the same reason.  That leaves mechanical stripping which alleviates the concerns about soda or chemical residue affecting final paint.  However, it takes much more time and for me was mind-numbing labor at its worst!  I used two different approaches:  heat gun & scraping with a razor blade and sanding.

Paint Stripping - Heat Gun & Razor Blade
I first learned of the the razor blade technique on the Corvette Restoration website.  This site has been an excellent resource for tips & tricks. (video link of it in action)  It worked ok, but would usually just take off the top layer of white paint.  My car was war bonnet yellow in color originally though, so more layers of primer and paint were underneath.  Eventually, I tried my heat gun to heat up a small area and then scrape with the razor blade.  The addition of the heat usually helped to remove all the layers when scraping.  Gouging the fiberglass was really easy to do though, and I did so more than I care to mention.  Also it still would frequently leave stubborn patches of paint that could not be scraped, and some of the contours of the body didn't mesh with the scraping process as well.

Paint Stripping - Sanding
Eventually, I switched to sanding as my primary approach to mechanically stripping the paint.  My dual-action sander with 80 grit paper worked pretty well.  Harder to reach nooks and crannies of the body were attacked with a sanding disc on a die grinder and even a Dremel.  The process creates lots of dust, so I was careful to suit up accordingly and moved outside as well.  All in all, this was the most effective for me, but you have to be careful to not sand too deeply though into the fiberglass fibers.  I did so more than I care to mention again and added more work for myself at the end to be sure those fibers are sealed before final paint... sigh.

Unfortunately as the paint came off, more & more fiberglass repair needs were discovered.  Some pics of the major needs are below.  Looks to me like my car has had at least a couple accidents... a rear bump to wreck the tail light panel, and a LH front bump to mess up that area.  I hope to get much of it repaired in the next several months as time permits.  Some parts & supplies are on order right now.  I think I'll get started with the rear and then work my way forward since the front end is most heavily damaged... save the 'best' for last!

Disassembly on the body continued the last couple days in the engine bay with the nose, headlights, front bumper brackets, etc. 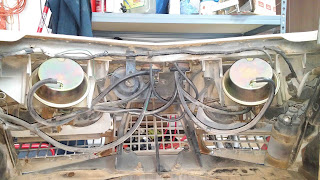 The process overall was more obvious than the wiper system, but still I was careful again to take lots of pics as well as tag hoses & wires to document everything.  It slows down the process for sure, but will help me during reassembly.

I started with tagging each vac hose and electrical connection for the headlights before unplugging them...


Then I moved on to removing the front bumper and its brackets that were still attached.... 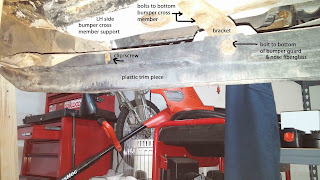 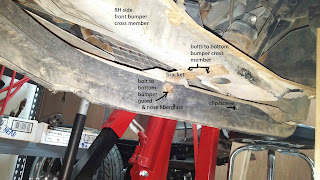 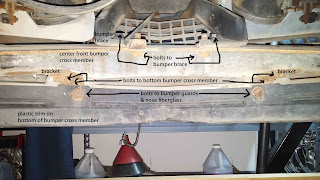 Finally, I easily removed the side marker lights and front grills.  A pic of everything out of the nose... 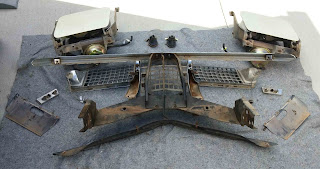 I'll send off the front bumper cross member support and brackets for powdercoat to match the frame.  For headlights, the plan to is to do away with the vacuum system and convert it to electric.  I plan on converting the vacuum system for the windshield wipers to electric as well, but more on that later since I have lots more body disassembly to do, etc.  Eventually, I'll have to decide what to do with the grills and bumper itself.  Rechroming bumpers is going to be pricey for sure, but maybe I can get away with a polishing or something?  They need to look awesome when completed though since they are a noteworthy design feature of this '72, the last year for chrome front & rear bumpers.

With everything out of the nose, I shored up my body dolly nose support.  This should do the trick I think... 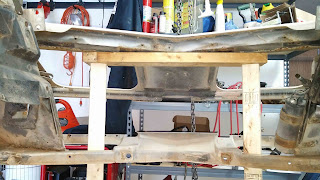 ... and with everything out of the nose, I could easily inspect the fiberglass.  I have some suspicious areas on the inside for sure.  Can't wait to see what they look on the outside after I strip the paint!

Time to Start Work on the Body... Wiper System Removal

With the chassis now a roller again, I moved it out of the way and rolled the body on its dolly into place.  First step was to do a more permanent repair to the broken caster support on the dolly.  It happened when pushing it over the lip of my driveway into my garage back when I did the body lift.  So just like a car, I jacked up the dolly/body assembly and put it on jack stands to do the repair.  Once that was done, I could be more comfortable working around the body.

The first thing I wanted to do on the body was to inspect the birdcage for rust, so I started the work to remove the windshield trim and windshield itself.  Eventually I realized that it would be easier if I removed the wiper assembly first, plus it needed to come out anyway, so I focused on that instead.  Unfortunately I cracked the windshield later though while trying to remove a rust-frozen screw on the LH fender corner trim... ugh!  The wiper assembly removal was enough work to be worthy of its own blog post, and for that matter documenting the process will help this noob remember how it goes back together!  So here goes.... 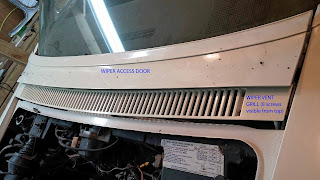 The vent grill is held in place by 8 bolts visible from the top.  It should be removed 1st to be able to then access the bolts to the wiper access door, and the wiper access door needs to be up in order to access these bolts.  Took some time, but finally figured out I could manually raise the wiper door by removing the rubber plug on its actuator face and then pushing inward on the assembly inside. 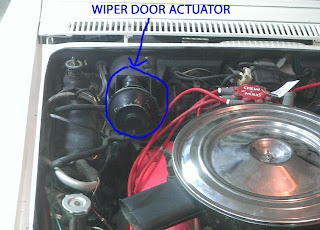 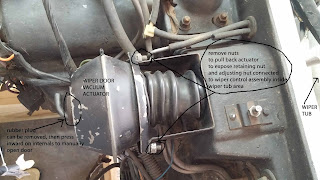 Once the door is in the up position, the 4 bolts holding it can be reached although there is not much room to work.  I've read that some people find these bolts rusted in place and quite difficult to remove but fortunately mine easily came out... perhaps another benefit of the car's Arizona origins.  When removing the bolts, look for the plastic bushings that surround the hinge support too as they help the door operate smoother I suppose.  Unfortunately the bolts on my RH side did not have the bushings in place, so I'll have to get some replacements when I put it all back together. 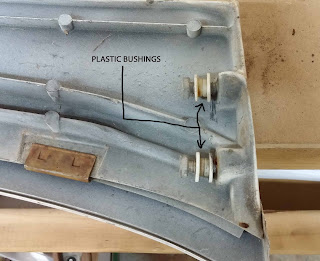 With that all done the control arm assembly is ready to be lifted out of the car. 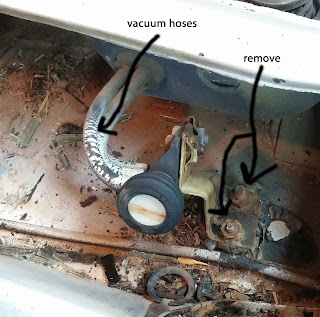 5.  Removing the wiper motor, limit switch, and vent grill bracket on the firewall
The wiper motor is center-top mounted on the firewall and held on by 3 nuts.  Unfortunately, one of them refused to budge and I had to cut it out... I'll have to figure out a repair later to re-mount it properly.  The limit switch is on the RH side of the wiper motor and attached to the firewall by 2 bolts.  I was careful to tag all electrical and hose connections as well as take multiple pics to document how it all goes back together.


Finally, here's a pic of everything out of the car.  I've partially reassembled components to help me remember how it all goes back together! 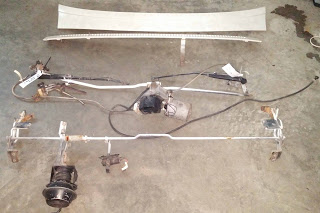